Our extensive Palm Garden, the Palmetum, is at the back of the Gardens at Lake Merritt. 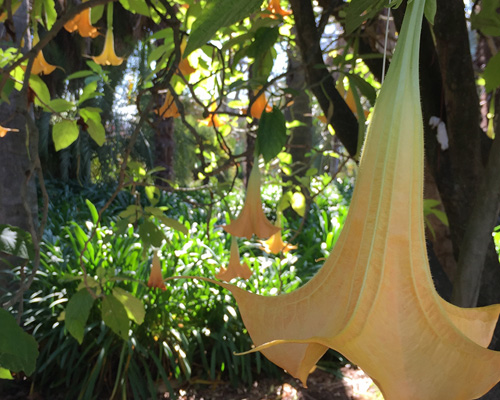 Our deeply shady Palm Garden/Palmetum is considered the most extensive, established collection of cool Mediterranean and high altitude tropical palms in the United States!

Tucked at the back of the Gardens at Lake Merritt, the Palmetum’s serpentine paths feature a great variety of palm species native to cool regions of Europe, Asia, Australia, Africa and the Americas.

The Gardens at Lake Merritt’s Palmetum is growing into prominence three decades after its founding on the shores of Lake Merritt. Its botanical collection compares with others on the West Coast—more than 70 species grow here! The selection of cool-climate palms that thrive in the coastal fog belt sets it apart.

Oakland’s unique subtropical microclimate provides the perfect growing conditions to nurture this collection. The Lakeside Palmetum is the result of one man’s dream for a public palm garden in the San Francisco Bay Area. Our founder of the Northern California affiliate of the International Palm Society was the late Warren Dolby. He was frustrated by the small number of species available at the retail nursery level. He wanted to show the many species suitable for our very mild climate.

Warren approached several cities but none were interested in his idea, including Golden Gate Park in San Francisco. At that time, circa 1980, the management of GGP was hostile to palms in general.

Warren eventually found the City of Oakland to be receptive to his idea, Lakeside Park at Lake Merritt in downtown Oakland is a city park dedicated to horticulture. Many plant groups have demonstration gardens there in The Gardens at LAke Merritt. The Palm Garden was allotted a plot which was formerly a truck parking lot. The City provides water and debris removal, the Palm Society is responsible for everything else. Garden staff does not help with this area.

Construction began in 1982 with soil imported for a small berm and installation of an irrigation system with three circuits covering the 0.6 acres of our plot. There was a formal dedication in 1984, hosting the IPS Bienial, and then a post-bienial trip to Australia. At last count there are approximately 60 palm species present. One of the goals is to do an accurate inventory of current species.