It’s located behind the Bonsai Garden, and contiguous with the Palm Garden (Palmetum), toward the back of the Gardens at Lake Merritt. 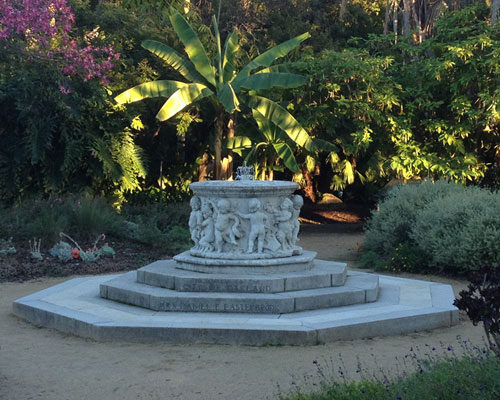 The site is unique and beautiful, tucked at the back of the Gardens at Lake Merritt. The Palmetum is a dramatic backdrop with its large palms and colorful tropical plants. The historic Easterbrook Fountain Wellhead, a gift to the City of Oakland in 1914, is the centerpiece of the Mediterranean garden.

Decomposed granite paths radiate out among mounded beds of Mediterranean plants in five different color palette combinations. The garden provides inspiration for gardening with low water-use plants appropriate for the Bay Area. But besides getting ideas for your own water-wise planting, you can just relax on one the teak benches, watch the bees and hummingbirds pollinating the flowers, and allow yourself to be drawn away to thoughts of the beautiful gardens of Europe or other Mediterranean regions of the world.

This garden continues to evolve, and delight, however, thanks to a loyal group of volunteers who come the first Saturday morning of every month, weather permitting, to weed, rake, prune, and plant.  Won’t you join us?   We have gloves and tools, of just show up and bring your own

Bruce Cobbledick, dedicated volunteer in the Gardens, and aspiring landscape designer, came upon the original plan a few years later, and was excited to see it through. He enlisted the help of Tricia Christopher, Landscape Architect, who polished the design, Paul Cowley of Potomac Waterworks, who planned the renovation of the Easterbrook Wellhead, and Nelson Kirk of the Palm Society, who undertook the irrigation.  This was the same team that had already successfully completed the renovation of the Sensory Garden.

Bruce began fund raising.  He won the first East Bay Municipal Utility District (EBMUD) WaterSmart Garden Grant.  In addition, he was able to secure donations from foundation, private individuals, and the Office of Parks and Recreation.

The original design and plant list of the MGS project were the starting point of the project.  Some sickly trees were removed and the Easterbrook Wellhead renovation begun. In June 2008, Oakland Public Works began grading the paths, and used the excess soil to create the mounded beds. The underground plumbing part of the irrigation was installed and bed preparation and the bedrock base for the paths was completed. We were able to take advantage of the unusually mild winter that year to put in the drip irrigation and begin planting in January 2009. The paths were completed and the first two benches were installed in time for the 50-100th Anniversary of the Garden Center and the Office of Parks and Recreation in June that year.

The Mediterranean Garden has been thriving ever since.  As with all gardens, a few of the original plants have not thrived, and a few have not performed as expected.  Furthermore, no garden is every really “done.”