Reflecting nature, these gardens are meant to create serenity

Reflecting nature, these gardens are meant to create serenity. Visitors stepping though the gate are enveloped by the visual experience of the flowers and plants, and by the soft sound of the waterfall.
Community Support For the Garden

The Aesthetic Pruning Club started maintaining this garden in 1985. Now under the direction of Bill Castellon, it continues to provide maintenance and improvements.

The Friends of the Japanese Garden was formed to raise funds so that the Merritt College landscape irrigation class could install the irrigation system. 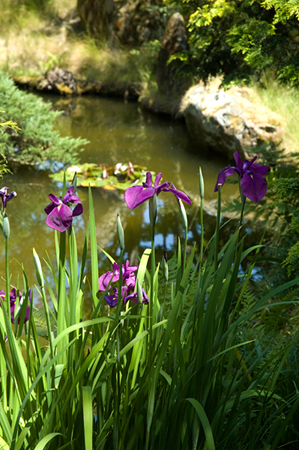 The traditional Japanese gate, and the fence which surrounds the garden, were funded by the Creative Work Fund, with the Lake Merritt Breakfast Club and other philanthropic organizations, and built and installed by Jay van Arsdale, the hand-tool carpentry instructor at Laney College, and his students. The Merritt College Aesthetic Pruning Club provides monthly maintenance and twice-yearly daylong pruning workshops for the garden.

To rent this garden for private functions, call the Oakland Parks and Recreation Central Reservations Unit at 510 238 3187.

By the mid 1980s the garden had suffered from lack of maintenance and then Vice Mayor Frank Ogawa asked Dennis Makishima to bring his students to the garden to improve it. Makishima had initiated the Aesthetic Pruning classes at Merritt College.